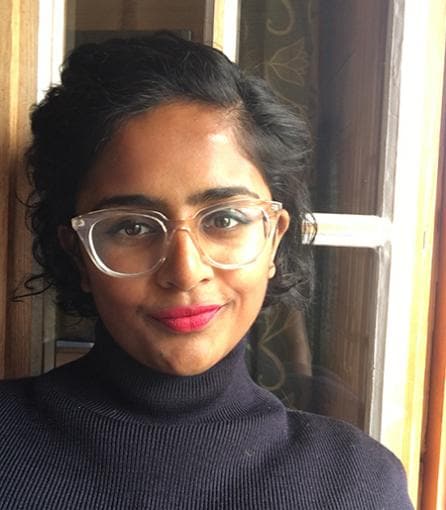 Mathura Umachandran is a classicist by training. Her work is committed to tracing the development of the methods and ideological forms of Classics in the post war Humanities and, thus, how Classics operates in contemporary culture in collaboration with systems of power. She wrote her dissertation in the department of Classics at Princeton University (2018) and comes to the Society for the Humanities after a post-doctoral position on the Anachronism and Antiquity project at the University of Oxford (2018–2019) and a Visiting Fellowship at the Institute of Classical Studies, London (2019–2020). She has recently co-edited a special issue on ‘Anachronism’ in Classical Receptions Journal (2020), in addition to articles on Iris Murdoch’s reception of Aeschylus, the conceptual history of ‘World Literature’, and public facing essays that addressed Classics as a racialized form of knowledge-making.  At Cornell, Mathura will be working on her first book, ‘Critical Mythologies: Classical Reception and the Frankfurt School’, which explores how the first generation of Critical Theorists made turns to Greco-Roman myth, seeking intellectual resources beyond enlightened reason. ‘Critical Mythologies’ examines how Theodor Adorno, Max Horkheimer, and Herbert Marcuse not only exploded the cultural value of antiquity itself by revising the concept of ‘myth’ in various ways, but also how they deployed specific narratives (the usual philosophical suspects Oedipus and Odysseus, as well as the less obvious candidates Narcissus and Orpheus) as openings for theorizing new political horizons of knowledge-making about the subject and her relations with the world.

Critical Mythologies: Classical Reception and the Frankfurt School  investigates the engagements with classical antiquity by some of the key thinkers of the first generation of the Frankfurt School. Theodor Adorno, Max Horkheimer, and Herbert Marcuse turned to myth to critique the formations of late capitalist modernity. I want to understand what motivated these turns to myth by thinkers who claimed to be in the genealogy of the Enlightenment. The Aufklärung had formed a set of philosophical contradictions around the Greeks as both firmly fixed in the ancient past and the trans-historical guarantors of Western reason. The Frankfurt thinkers found that the instability of these contradictions was in part to blame for the extreme way in which irrationality forced itself to the surface in the twentieth century. Critical Mythologies therefore examines how the Frankfurt thinkers critically repurpose mythological figures of reason. I argue that, by using Odysseus (as the heroic figure of cunning), Prometheus (as the author of anthropocentric ingenuity) and Oedipus (as the figure of self reflexive), these thinkers interrogate modernity’s self-fashioning as supremely rational and the telos of progressive history. Within a framework of dialectical reception, Critical Mythologies argues that the Frankfurt thinkers’ turns to myth organize historical relationships of non-identity with antiquity to illuminate the political reflexes of classicism.