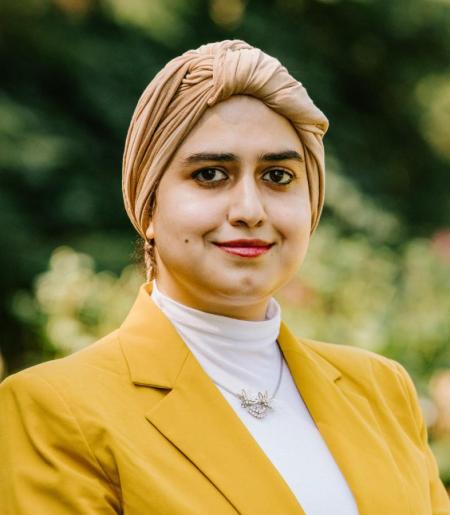 Eman Ghanayem is a Mellon Postdoctoral Fellow in the Society for the Humanities and the Department of Comparative Literature. Prior to coming to Cornell, Ghanayem was the 2020-2021 Chancellor’s Postdoctoral Fellow in the Department of Asian American Studies at the University of Illinois at Urbana-Champaign (UIUC). She earned her Ph.D. in English, with minor degrees in American Indian Studies and Gender and Women’s Studies, from UIUC. Her research spans the areas of Indigenous studies, comparative ethnic studies, and transnational gender and women’s studies. Towards a global theory of belonging, and its confluences under colonial conditions, Ghanayem’s research addresses the relationship between natives, settlers, and refugees in both “new” and “old” world contexts. Her first book project, Nations without Nationalisms: On Palestinian and American Indian Literary Imaginations, argues that indigeneity, as expressed in American Indian and Palestinian literatures, offers a necessary critique of (settler) nationalism as a product of the colonial west, as well as represents an alternative form of homemaking that is land-oriented, relational, and can function without a state. Ghanayem authored a piece on Palestinian American Activist Rasmea Odeh in Women’s Studies Quarterly (2019) and co-edited a special issue in Transmotion titled “Native American Narratives in a Global Context” (2019). She is currently working on forthcoming publications in Amerasia and the Routledge Companion to Refugee Narratives. Ghanayem taught a wide range of courses in the Department of English at Birzeit University in the West Bank and the Departments of English, Gender and Women’s Studies, and Asian American Studies at the University of Illinois at Urbana-Champaign.

Nations without Nationalisms: On Palestinian and American Indian Literary Imaginations unravels the question of indigeneity as it implicates native, refugee, and migrant histories, and as it similarly manifests in Indigenous North America and Palestine. Here, Palestine as a place of contested belonging that includes Arab and Jewish histories represents an exemplar through which we can understand modern diaspora, cultural tensions as foundational to the nation-state, and the international reaches of settler colonialism and Indigenous resistance. By framing Palestine as a space of Indigenous belonging experienced aesthetically at home and in the diaspora, I am able to open up its literary landscape for critical global comparison that relates it metaphorically and materially to American Indian experiences with land usurpation and displacement. From the onset, this comparative literary analysis reveals the precariousness of American and Israeli nationalisms and their paradoxical cooptation of Indigenous histories. In addition, by highlighting the depth of Palestinian and American Indian land-based belonging that has functioned without independent statehood, this book argues that indigeneity disrupts contemporary conceptualization of state nationalism and its possessive imagination. This project encompasses the fields of American Indian studies, Palestine studies, diaspora studies, and critical race and feminist theories and proposes global Indigenous analysis as unquestionably essential to understanding cyclical violence, the refugee crisis, and the colonial roots and iterations of the nation-state.