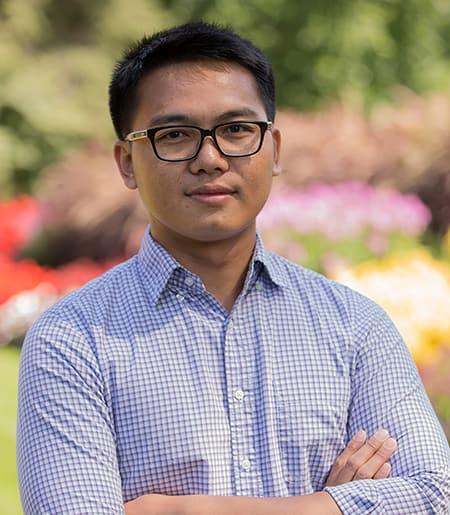 Chairat Polmuk is a PhD candidate in Asian literature, religion, and culture at Cornell University. He received his MA in Southeast Asian studies from Cornell in 2013, writing a thesis on Lao literary modernity. Prior to his academic journey to Ithaca, Chairat taught the Thai language and poetry at the Department of Thai, Chulalongkorn University in Bangkok, where he obtained his BA (first-class hons) and MA in Thai literature. He has published book chapters on contemporary Thai cinema and Lao literature, including ‘Labor of Love: Intimacy and Biopolitics in a Thai-Burmese Romance’ (2016) and “Old Tales in a New World: Lao Literature and Cultural Movements under French Colonialism” (2015), both by Chiang Mai University Press. His encyclopedia entry on Apichatpong Weerasethakul is under review by Oxford University Press.

My project, Decaying Corpora, proposes to dissect the material remains and affective residues of Cold War political violence in contemporary Southeast Asian mediascapes from the late 1990s to 2010s. Through an investigation of cinematic and literary remediations of photographic, bodily, and other physical remnants of war, I pay attention to the way in which aesthetic configurations of material corruption interrogate silenced histories of anticommunist suppression (Thailand), American covert bombings (Laos), and genocide (Cambodia). I use the trope of corruption to conceptualize an inquiry that bridges material and metaphorical conceptions of decay in an analysis of artistic practices and political cultures in post-Cold War Southeast Asia. Focusing on independent cinema by directors such as Apichatpong Weerasethakul, Rithy Panh, and Vong Phaophanit alongside an emergent genre of testimonial narratives, I investigate how these aesthetic mediations of the ruins of the Cold War intervene into ongoing issues of censorship, military dictatorship, developmentalism, and neoliberal regionalism that have hindered processes of historical accountability for almost half century. Under such political constraints, filmmakers and writers have mobilized material corruption to pollute conventional aesthetic categories, commemorative forms, and national historiographies. Specifically, I focus on how Southeast Asian artists and activists alike bring a Buddhist-derived notion of ephemeral mediation, or what I call, a “Buddhist archival impulse,” to bear on the corruptions of materiality, temporality, and affect in artistic practices and oppositional politics. In bringing Buddhist studies into conversation with media studies, affect theory, and material culture studies, my dissertation will contribute to an interdisciplinary investigation of corruption archives in which corrupt matter animates novel forms of political and aesthetic interventions.