In this new series, we highlight former Fellows’ monographs that grew out of their residency projects at the Society for the Humanities. Our third iteration of the Fellows' Q&A series features Mary Armstrong Meduski '80 Assistant Professor of Performing & Media Arts and Faculty Fellow for 2016-17, "Skin," Samantha Sheppard. Her book, Sporting Blackness: Race, Embodiment, and Critical Muscle Memory, was just released this week (June 16, 2020) from University of California Press. 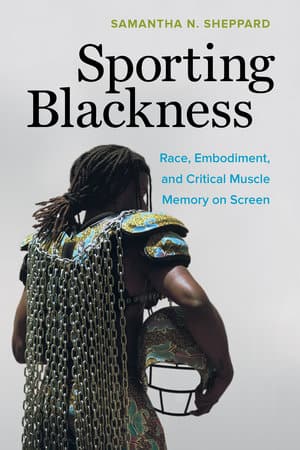 Sporting Blackness: Race, Embodiment, and Critical Muscle Memory questions what happens when the visual legacy of blackness in American cinema collides with the visual legacies of Black sporting bodies. In my attention to sports films, I interrogate a genre that has been critically neglected. When it comes to studies of sports films and Black representation, there is a lot of focus on the stereotypes of black athletes, or what I call “skin in the game.” With Sporting Blackness, I wanted to pivot the discussion to also consider “skin in the genre.” This means that I examine what Black characters, themes, and cinematic-athletic stylistics do to the sports film in terms of generic modes, codes, and conventions. With this shift, I am underscoring a focus on race in sport films not only in terms of content but also in terms of film form. Alongside an examination of what it means to “sport blackness” on screen is a deep consideration for the material and tangled histories of Black athleticism in sports films. I coined the term critical muscle memory to articulate these embodied, kinesthetic, and cinematic histories that go beyond a film’s narrative to index, circulate, reproduce, and/or counter broader narratives about Black sporting and non-sporting experiences in American society. The phrase and its meanings come from human kinetics, but its epistemic conditioning derives from the interdisciplinary work on corporeality and memory in Black literature and cultural studies. Critical muscle memory gets at the intra-and intertextuality of the Black sporting body and performs an urgency to read history as racialized corporeality.

The book mobilizes Stuart Hall’s notion of Black bodies as “canvases of representation” that are able to mean and mean again on screen. My chapter “Racial Iconicity and the Transmedia Black Athlete,” for example, really illustrates Hall’s concept. In the chapter I focus on Boobie Miles, a former Texas high school football player whose legend is chronicled in H.G. Bissinger’s 1990 bestseller Friday Night Lights: A Town, A Team, A Dream. Bissinger’s book inaugurates the Friday Night Lights franchise, and I study Boobie as a transmedia character who travels across affiliated and unaffiliated media texts including NBC’s short-lived Against the Grain (1993), Peter Berg’s film Friday Night Lights (2004), the critically acclaimed NBC (2006–2008)/The 101 Network (2008–2011) drama Friday Night Lights, and rapper Big K.R.I.T’s lyrics and videos for “Hometown Hero” and “Boobie Miles.” In terms of sporting blackness, Boobie embodies the emblematic and vexed meanings and corollaries associated with being what Nicole Fleetwood describes as a “racial icon.” I study Boobie’s (re)compositions across literary, cinematic, televisual, and sonic platforms and argue that Boobie’s sporting history has become memorialized as iconic and familiar, a discourse on exceptionality and failure, and a site of cultural (re)production for those who (re)imagine him in popular culture. As a result, critical muscle memory constitutes both the situation and the structure of Boobie as icon within the cinematic apparatus and other performative locales. Significantly, I point out how rapper Big K.R.I.T.’s hip hop spectatorship reclaims Boobie’s embodied failures as a site performative agency and rhetorical success.

"I was inspired to think about sports and film as distinct yet shared cultural arenas for racialized imagery and meaning-making."

In researching Black representation in sports films, I was honestly surprised that there was so little written on the topic. There are so few sports film studies books, and studies of blackness take up usually a chapter or less in these works. The gap in film scholarship was shocking because there is actually a lot written about sports and race in other sports studies disciplines. Because of the popularity of sports and cinema, and because both areas are sparking more and more academic scholarship, I was inspired to think about sports and film as distinct yet shared cultural arenas for racialized imagery and meaning-making. Most of all, I realized I am just a sucker for a good sports movie (I still cry at the end of Remember the Titans with no shame).

I learned so much as a “Skin” fellow. Being in a consortium of humanists was particularly transformative to my understanding of the interdisciplinary textures of embodiment. During my time as a faculty fellow, I received feedback on an early (and very rough!) draft of the book’s introduction. The other fellows were rigorous, substantive, and generous in their comments. Their interventions pushed me to really think about my book’s intervention and my own critical offering on the topic. I ended up transcribing the workshop. As I rewrote the introduction with their critical insights in mind, I found myself often going back to their provocations, questions, and concerns to push myself to think more acutely and cogently about what I meant by “sporting blackness” and “critical muscle memory.” For example, Alicia Imperiale asked me: how deep is the color? That beautiful phrase floored me. Her query challenged me in all the best ways possible to think about the wells and swells of meaning that resonate from Black sporting bodies. In the end, Sporting Blackness’ theories, methodology, and argument would not have been the same without them.

Ricardo Wilson on his new book, The Nigrescent Beyond