Ricardo Wilson on his new book, The Nigrescent Beyond

In this new series, we highlight former Fellows’ monographs that grew out of their residency projects at the Society for the Humanities. Our fourth iteration of the Fellows' Q&A series features assistant professor of English at Williams College and Mellon Postdoctoral Fellow in Africana Studies  2016-18, Ricardo Wilson. His book, The Nigrescent Beyond: Mexico, the United States, and the Psychic Vanishing of Blackness, is out this month (July, 2020) from Northwestern University Press.

In The Nigrescent Beyond I explore the psychic vanishing of blackness within the collective imagination of the Mexican nation and think through how this work might nurture related discourses within the field of a United States–facing black studies. To get a sense of this vanishing in the Mexican context one could read Brian Hamnett’s latest edition of A Concise History of Mexico (Cambridge University Press, 2019). In its five hundred pages, there is just one sentence dedicated to Mexico and its history of African slavery: “Earlier use of negro slavery did not have a lasting significance in New Spain.” This marker of absence is located in a one-hundred-plus-page portion of the book dealing with periods where blacks played a very visible role in Mexican society. Erasures like this exist despite the fact that there has been a rise in Afro-Mexican scholarship, particularly over the last twenty years, that presents a dramatically different picture. 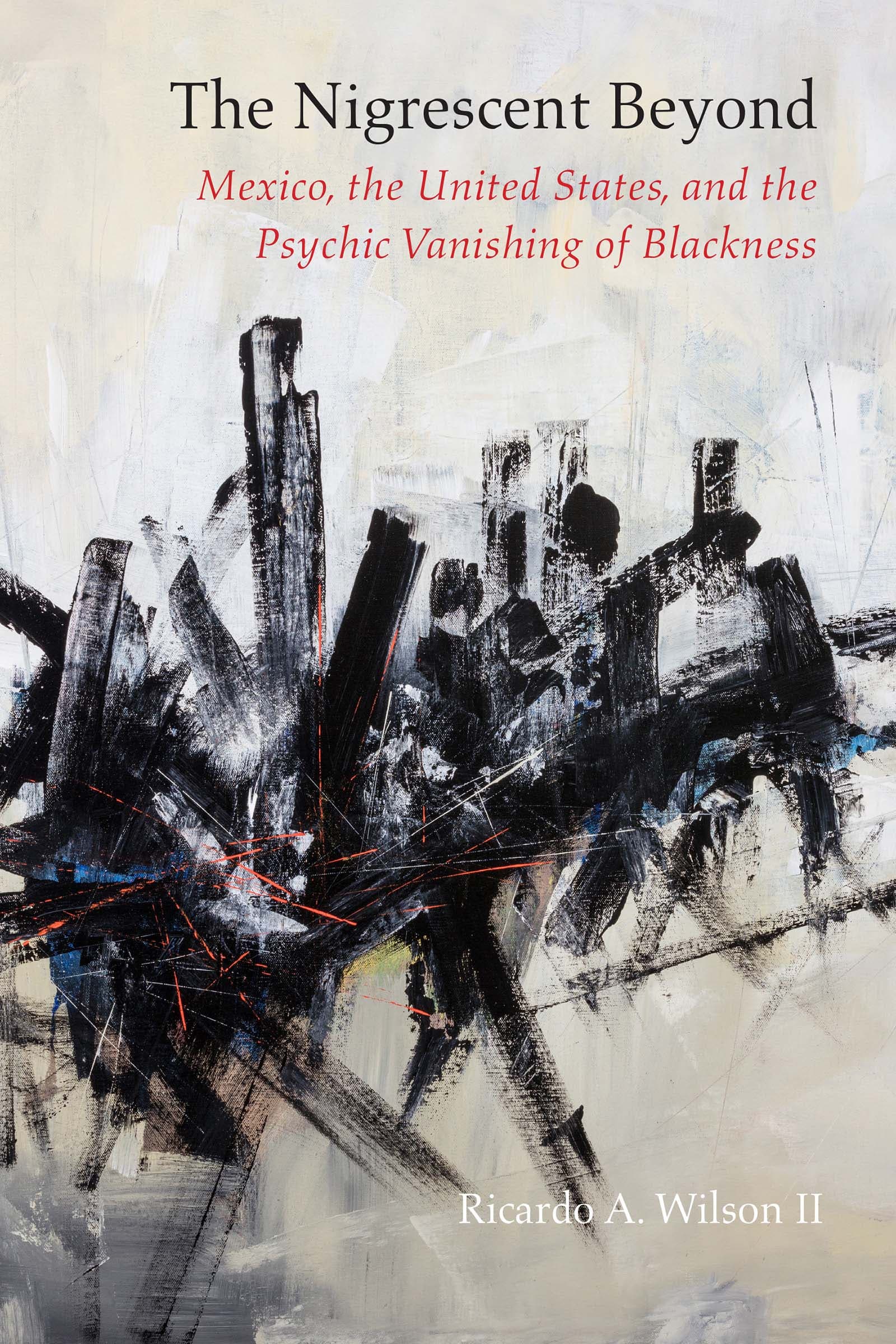 Mexico’s much longer trajectory concerning postraciality and the disappearance of black radical possibility gives clarity to the relation between ideas of blackness that remain legible and acceptable within the boundaries of a collective liberal imagination and those located outside it that compromise this imagination. Following this, I look to the center of several popular and canonical texts (literary, cinematic, archival, etc.) to find flashes of this nonpresence and address how, in this contemporary moment, a text can be read to tell the story of something that has to have no story. My work thus models a practice of reading that honors and encourages the disruptive possibilities offered by a sustained, if anxious, awareness of what I term the nigrescent beyond, or that which lies, irretrievable, beyond the horizon of vanishing itself. As such, nigrescence, the process of becoming dark, is mobilized to articulate the contours of a barrier at the limits of a collective imagination, beyond which certain radical black matter(s) has become and is becoming unreadable even as one reads.

Viaje por la historia de México is a full-color, glossy booklet produced by the Mexican government in conjunction with the Instituto Nacional de Antropología e Historia and the Consejo Nacional para la Cultura y las Artes and endeavored to present a quite complete historical overview from Mexico’s pre-Columbian era to the present as the nation prepared to celebrate its bicentennial in 2010. More than twenty-five million copies were freely distributed. In the final words of his introduction, then-President Felipe Calderón prepares the reader for a vision of Mexican history that is “generosa, plural, abierta, y constructiva” (generous, plural, open, and constructive). As one might expect, the narrative that follows, and the gaps it presents, contains an extraordinarily bracketed plurality, especially in regard to Mexico’s afro-descendent elements. Though there are two brief mentions of slavery being abolished, the idea of African slavery is never specifically presented, and neither the benefits to the state nor the large population it produced are discussed. This present absence is no more evident than in the section of the book dedicated to the height of the baroque period in Mexican history. The highlight of this section is a discussion of la Virgen de Guadalupe whose symbolic importance was cemented during this time.

Placed above the text of this section is a detail from a 1709 painting by a member of the famed Arellano family that contributed greatly to the genre of casta paintings, the predominantly eighteenth-century style of painting in colonial Mexico that sought to categorize and classify the racial and social makeup of New Spain. The editors of Viaje por la historia de México selected a close-up that highlights the image of la Virgen that miraculously appeared on the garment of Juan Diego in 1531 as proof of her existence. Just above la Virgen, the artist has placed a black man and a black woman who are dressed in somewhat regal garments standing on a balcony. There is nothing in the text that prepares a reader for the emergence of these figures; from the perspective of contemporary Mexico, I argue, they remain illegible. I go on to use the texture of this illegibility to discuss similar apparent vanishings in both the United States and Mexico.

"The Nigrescent Beyond, in many ways, adds to a toolkit within black studies that enables a more effective engagement with the present moment, a moment that demands that we not only confront an emboldened white supremacy but an antiblackness often times cloaked in the rhetoric of progressive change."

One would be hard pressed to find anything more representative of the collective liberal imagination in the United States than the Obama White House Archives. I was fortunate to have had the opportunity to explore the documents contained therein at a time when the ideas of my book had already matured. The website is framed by words drawn from the president’s farewell address: “Yes, we did. Yes, we can . . . You were the change. You answered people’s hopes, and because of you, by almost every measure, America is a better, stronger place than it was when we started.” On this same page you are reminded that this archive “is historical material ‘frozen in time,’” a repository of what we will be heir to.

I was curious to read how the most vulnerable black lives were recorded, and so began with those articulated by Alicia Garza, Patrisse Cullors, and Opal Tometi in the original Herstory of the Black Lives Matter movement: Trayvon Martin, Tamir Rice, Tanisha Anderson, Mya Hall, Walter Scott, Sandra Bland, and Mike Brown. Michael Brown’s surfacing in the archive is indicative of the mounting gravitational pull of the nigrescent beyond. Reacting to the shooting death of Brown, on August 12, 2014, Obama released a statement in which Brown is referred to as “passing” in the statement’s title, and there is no hint of a violent death at the hands of law enforcement in the 129 words that follow. However, in the universe of Obama’s archive, there is not one mention of Mya Hall, the twenty-seven-year-old trans woman who died after police riddled the car she was driving with bullets, leading to a fatal car crash a stone’s throw from the National Security Agency’s headquarters in Baltimore. Given her marginal status—as a trans and queer body, as a sex worker, and as socioeconomically disadvantaged—her illegibility is not entirely surprising. But even Tanisha Anderson, the thirty-seven-year-old woman who stopped breathing after being slammed to the concrete by police, does not surface in this archive. And absent from the lips of Obama is the name of Sandra Bland, the twenty- eight-year-old woman found hanged in her jail cell three days after being arrested for a traffic stop in Texas. As Audre Lorde reminds us, if black men are the nightmare, “even worse than the nightmare is the blank. And Black women are the blank.” In other words, there is no space within the bounds of this imagination for Hall, Anderson, or Bland and the countless blank bodies existing beneath this register. This frightening yet predictable absence led the African American Policy Forum to begin the #SayHerName social movement in 2015. The Nigrescent Beyond, in many ways, adds to a toolkit within black studies that enables a more effective engagement with the present moment, a moment that demands that we not only confront an emboldened white supremacy but an antiblackness often times cloaked in the rhetoric of progressive change.

The security of the two-year fellowship granted me the ability to put the project completely in the drawer for six months. In the current market, this is an unusual blessing. In that time, I soaked up as much as I could from my Time fellows as they approached their own work. Having a room full of dynamic scholars at different moments of their careers who were so generous with their time was particularly special. While the manuscript was breathing, I was also able to devote my attention to a fiction project (An Apparent Horizon and Other Stories) that I had been writing alongside and in communication with my theoretical concerns. When I picked The Nigrescent Beyond back up, I returned to its ideas with the kind of perspective necessary to make hard changes and the renewed vigor to see those changes through. The support of the administrative staff in Africana Studies and at the Society for the Humanities was robust, and the mentorship of Gerard Aching, Salah Hassan, and Tim Murray was invaluable. I am exceedingly grateful for the friendships I made with both the Time and Skin cohorts as they have done much to shape not just my first book but my experience in the academy.