In this new series, we highlight former Fellows’ monographs that grew out of their residency projects at the Society for the Humanities. Our second iteration of the series features Dick Wolf Assistant Professor of Television and New Media Studies at University of Pennsylvania, Rahul Mukherjee, Atkinson Sustainability Fellow for the 2017-18 "Corruption" year. His book, Radiant Infrastructures: Media, Environment, and Cultures of Uncertainty, was just published in March by Duke University Press. 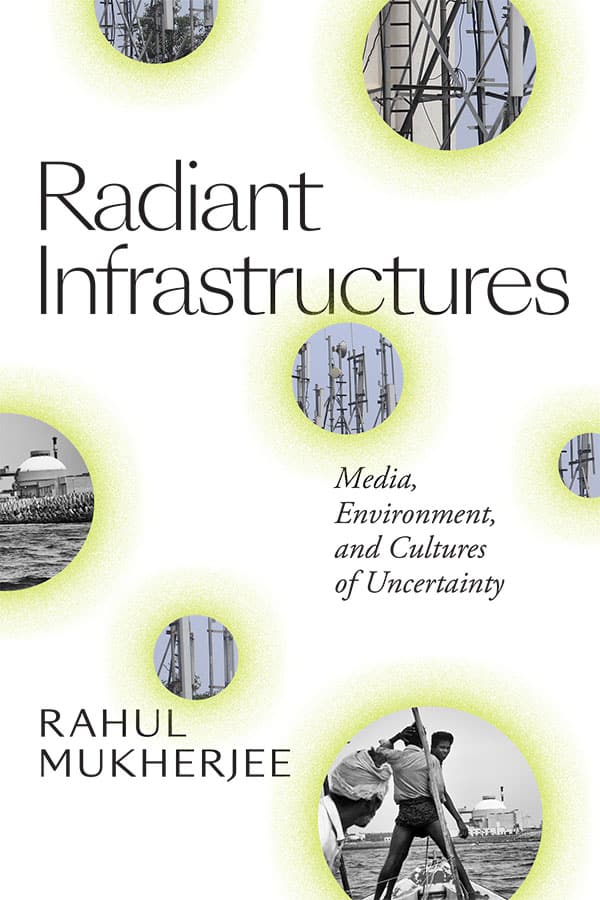 To trace the emergence and reconfiguration of an environmental controversy, I realized that it becomes crucial to track the intermedial connections: how one type of media coverage follows another, and how a news story develops as information and rumors flow across various news platforms. When I was studying the environmental controversies around nuclear reactors and cell towers, I found that if the Indian nuclear establishment came up with a pedagogical animated cartoon series preaching the benefits of nuclear energy, the anti-nuke activists would respond with a documentary showing how livelihoods of fishermen were affected by nuclear power plants. Similarly, debate about cell towers in a talk show would be followed by journalists accompanying affected community members visiting the cell antenna in their backyards, as the towers were perceived to be causing health problems among residents.

There is no one central, all-capturing medium capable of covering the biomedical crisis surrounding radiant infrastructures. Rather, media are dispersed across many forms, genres, and practices: documentary films, talk shows, and digital maps (of radiation hot spots). Quite often, books or articles studying media coverage of environmental controversies tend to focus on a very select group of media forms and genres. Avoiding this pitfall, and adopting an intermedial approach, my book accounts for relations among a wide variety of media, texts, and forms covering a particular environmental controversy.

Radiant infrastructures are also often cited in debates about exposure: contacts between radiation and human bodies. Even when experts pronounce particular distances and specific threshold levels of radiation to be absolutely safe, the bodies of survivors rebel. On television shows and documentary films, patients offer testimonies about living in proximity to nuclear reactors and cell towers. Since different bodies demonstrate different sensitivities toward ionizing and non-ionizing radiations, many citizens question the wisdom of blanket threshold levels.

Even when experts pronounce particular distances and specific threshold levels of radiation to be absolutely safe, the bodies of survivors rebel.

Developments in radiant infrastructures are matched by developments in measurement infrastructures that have made it easier to detect radiation. In the book, I detail how new citizen-sensing projects based on critical data design are helping citizens assess their exposure to radiation. Ordinary citizens are now able to gather crowdsourced radiation data that can be linked with other environmental and health statistics. These projects are new exercises in democratic participation with regard to environmental decision making.

Let me share an anecdote from my fieldwork in Jaipur in December 2012. A businessman in Jaipur, the brother of a cancer patient who resided close to a cluster of cell towers, spoke of his efforts to get the towers removed. The businessman was convinced that the signals emitted by cell towers were causing his brother’s cancer. The municipal authorities and telecom operators resisted his efforts but reassured him that they would reduce the signal levels emitted by the towers. He regularly monitored the transmission power levels with a radiation detector because he feared the municipality would quietly increase the power density. The radiation detector helped this businessman perceive the cell tower radiation—in the form of glowing LED lights—that he could not see, smell, or taste, but the device did not assuage his fears entirely. He was only convinced that the radiation levels had truly been reduced when peacocks returned to his garden nine years after the mobile towers had been erected. The return of the peacocks was a return to normalcy. If the peacocks did not feel the radiation signals to be oppressive, he could finally relax.

This anecdote illustrates how cultural knowledges and bodily knowledges cannot be neatly separated, and that while sensory experiences change with new technologies (detectors, antennas), they are also culturally situated (return of the peacocks).

This anecdote is an illustration of how ordinary people faced with an environmental/health crisis cope with actual experiences of uncertainty. We witness such cultures of uncertainty in this moment of COVID-19 global pandemic as well where neither the experts nor “laypersons” can say with certainty how exactly this particular coronavirus (SARS-CoV-2) is transmitting through surfaces, bodies, and materials. Therefore, people are emerging with their own ways of disinfecting food and cardboard boxes etc.

At Cornell’s Society for the Humanities, we had insightful and fascinating conversations over delicious lunches and dinners. Interacting with Fellows, learning about their research, and then sharing with one another what connections we saw across disciplines created a camaraderie that inspired me to write and research. The A.D. White House’s garden added to the vibrant atmosphere, and the summer and the Fall in Ithaca were just splendid.

The feedback I received after I delivered the annual Sustainable Futures Lecture helped a lot in improving the introduction of my book. I workshopped the 3rd chapter of my book, “Emissions,” at the Fellows Seminar. This chapter on emissions addressed the annual theme of “Corruption” in relation to leaks (both of information and radiation/signals) and contamination. It was a fantastic workshop experience, wisely moderated by Paul Fleming, and the Fellows had such encouraging and discerning comments and suggestions.

During my time at the Society, I also received support from the South Asia Program and Cornell’s Department of Science and Technology Studies, where I presented my research and received very helpful feedback. Finally, Amy Sara Carroll, Ricardo Dominguez, Conerly Casey, Chairat Polmuk, Ayelet Ben-Yishai, Erik Born, Robert Travers, and Amie Parry were an amazing group of Fellows who provided both academic insights and affective sustenance to work on my research project during my time at the Society.