In this new series, we highlight former Fellows’ monographs that grew out of their residency projects at the Society for the Humanities. We begin with Cornell professor of comparative literature, Naminata Diabate, Faculty Fellow 2016-17 "Skin" year. Her book, Naked Agency: Genital Cursing and Biopolitics in Africa, was published earlier this month by Duke University Press.

Naked Agency explores the political significance, the cultural underpinnings, the artistic restaging, the global implications, and the conceptual complexities of a gesture. That gesture, known as genital cursing, genital power, or naked protest, is mature women’s collective aggressive removal of clothes or threat thereof during socio-political duress in sub-Saharan Africa. The social power of the gesture can best be understood in the context in which shame is the central component in the structuration of relations and in which the adult female body is considered as housing potent forces. By revealing their tabooed body parts or threatening men with menstrual cloths, accompanied by incantations of curses, the women are said to be unleashing the forces that reside therein, causing their male targets a myriad of misfortunes, including impotence, infertility, incurable diseases, and literal or social death.

In the book, I establish the historical life of this gesture. Although documented since medieval times in Africa (Diabate 2016), accounts of public demonstrations involving the gesture flourished during the active anti-colonial era (1920s-1970s), in the democratic awakening of the 1990s, and again in the 2010s during what Achille Mbembe has called the necropolitical era, which registered the highest number of naked protests. I go on to explain how the growing suspension of normative structures (institu­tions, legislations, and practices) under the pretext of exception and crisis (biopolitics/necropolitics) has led many to their last resort, the literal self-exposure of their already figuratively exposed bodies. Additionally, the proliferation of uncivil disrobing reflects the women’s rejection of conventional channels of participatory democracy, including voting, participating in political parties, lobbying, and writing letters to politicians. 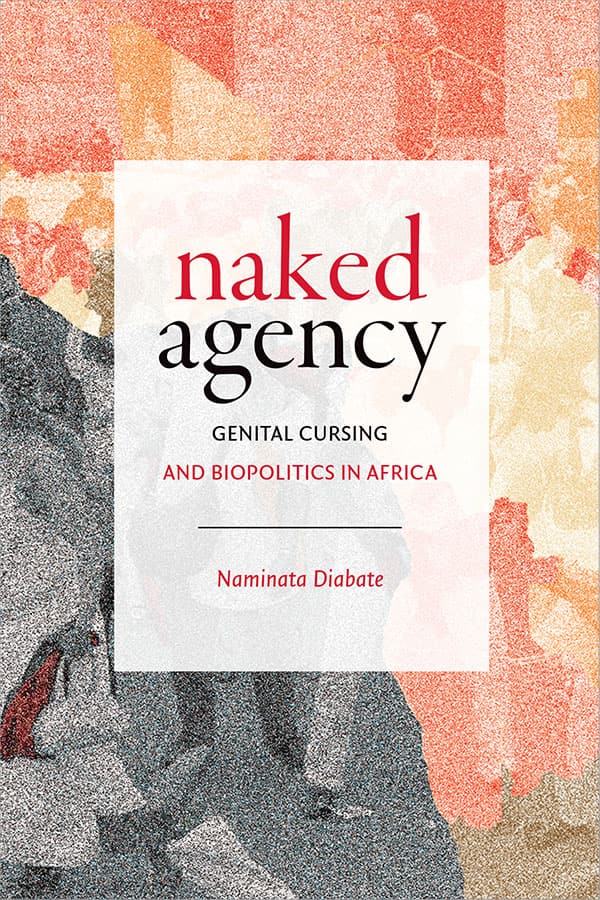 Finally, I propose a new concept and reading praxis for a deeper account of the texture of naked protest, which I call “naked agency.” The putatively oxymoronic term in which “naked” is formulated as exposure and vulnerability and “agency” as the ability to act or react intentionally allows for the messiness of defiant disrobing, whereby it can engender a host of manifestations—strength and weakness, strength as weakness, and strength in weakness. The protest and its manifestations through various stakeholders and cultural products reveal a cycle of contestation, exploitation, and misreading that may differ from the women’s original plan. In this cycle, the agency of the women, their targets, and other stakeholders—artists and myself as a scholar—are simultaneously co-constitutive, instrumentalized, precarious, and triumphant. In doing so, I bring into conversation biopolitical theory and African political and cultural histories to frame naked protest as a signifying shorthand that I unpack for various audiences.

Diverging from reflections in specific disciplinary contexts—political science, anthropology, and literary criticism—that highlight triumphant accounts of the women’s gesture, Naked Agency offers a different way of conceptualizing defiant self-exposure by considering the reactions of the women’s targets, bystanders, and translators as crucial to accounts of the gesture. I explore the gesture from a multidisciplinary perspective in which I juxtapose visual artworks with literary fiction and news reports.

A July 2002 confrontation between thousands of women of the Niger Delta and Chevron Texaco over the mismanagement of natural resources showcases naked agency as a reading lens. I read news reports of the July 2002 event in combination with the American filmmaker Candace Schermerhorn’s 2010 feature documentary on the event, The Naked Option: A Last Resort (2010), and the Nigerian T. Obinkaram Echewa’s 1990 historical novel I Saw the Sky Catch Fire, which includes a fictionalization of the 1929 Igbo Women’s War. Together, these different media sites highlight the multilayeredness, infinite developments, and possible connections of an event we thought known and completed. The women’s feelings, the proliferation of insurgent nakedness, and the dangerous backlash that the gesture encounters constitute a few of its multilayered narratives.

According to news reports, for seven days, the women who demanded employment for their families and infrastructure for basic needs like schools, roads, and water and electrical systems, held hostage seven hundred Ameri­can, British, Canadian, and Nigerian workers with their threat of cursing nakedness. Halting oil production, costing the multinationals millions of dollars, Chevron Texaco agreed to negotiate with the protesters. One journalist noted that for the women “what started out as an act of desperation became a method to victory.” Asked about their abilities to take men hostage without guns or heavy artillery, a spokesperson for the protesting women proclaimed, “Our weapon is our nakedness.” Although memorable, the self-aggrandizing declaration obfuscates several aspects of the event: the constitution of the women’s collective, the kind of organizing behind the forceful occupation of export terminal and properties, the women’s expectations, the reactions of their targets, the way the declaration was distributed among media and the possible uses to which it was put, and more. A news­paper report naturally truncates, condenses, and simplifies complex statements, especially about an “African” practice for Western readers. But juxtaposing this event with other media sites such as The Naked Option: A Last Resort (2010), and I Saw the Sky Catch Fire allows readers to consider key questions: Were the women hoping for their “nakedness” to be the most significant aspect of their protest? Perhaps the women did not intend or foresee the uses and misuses of their strategy. By calling it nakedness, is the women’s leader stripping the act of its complex connotations to make it legible to the international reader? In her statement, how inclusive is the word “our?” Did the deal reflect the women’s expectations?

Research for this book showed me that the July 2002 standoff and such protests are not just definite events with knowable and foreseeable implications. They are, rather, complex events interwoven with narratives of desperation, agency, satisfaction, exploitation, and dissemination. Broadly, because of the attention that nakedness in protest be­gets, especially in our image-saturated world, and because of its nature as signifying shorthand, the gesture is subject to mediation and translation, and it demands exploration. The book thus suggests that the protests should be read on their own terms but also in conjunction with larger sociopolitical and aesthetic frameworks.

“Broadly, because of the attention that nakedness in protest be­gets, especially in our image-saturated world... the gesture is subject to mediation and translation, and it demands exploration.”

The most unexpected surprise came from navigating both resistance from within African Studies and resistance from without—hypersexualized images of black women in the Western media. A few African academics in the United States have said that to analyze mature women’s defiant self-exposure, as I have in Naked Agency, is to subject these bodies to double injury: racist colonial and neocolonial texts have violated (images) of African women’s bodies for centuries. Resistance from without had to do with what I have called the pervasive picture of negative sexualities, the ubiquitous images of violation, rape, and cutting. I continually asked myself this question: How do I critically engage these materials while refraining from theorizing my own critical fantasies, anxieties, and projections? These challenges proved productive as I approached my texts with a deeper sense of responsibility and respect for the women who dare disrobe for dignity and justice.

My year at the Society on “Skin” afforded me a much-needed intellectual space that markedly influenced the book. The community of scholars deepened my understanding of the various ways in which the notion of skin cuts across multiple disciplines, and historical, geographic, and cultural perspectives. Despite our academic differences, my colleagues became interlocutors, alleviating the sense of loneliness that writing a book on naked protest had created. Through passionate and respectful exchanges, I engaged various concepts and notions: the medieval practice of skinning, the weight and thickness of black skin, the use of skin as book covers, the skin of buildings, haptics, the ancient world of cavities, and more. Note that my “skin fellows,” as we called ourselves, came from disciplines such as anthropology, architecture, classics, comparative literature, digital humanities, English, environmental studies, health humanities, history, performing and media arts, philosophy; and fields, including Africana studies, German studies, and Near Eastern studies.

Weekly readings, workshops, reading groups, conference presentations, and public lectures enriched my vocabulary about surfaces, cavities, sinews, layers, and my knowledge of the inner workings of multiple disciplines and institutions. The ensuing comradery has lasted beyond the year at the Society.

Lastly, the community of Fellows from the above-mentioned dizzying variety of fields and disciplines inspired me to formulate and lay out clearly my arguments to make Naked Agency accessible to those outside of my immediate academic audiences. For instance, the feedback on several chapters demonstrated the necessity for me to elaborate on points that I had taken for granted and deemed unnecessary to explain. In sum, the Fellows’ serious engagement with the book made it a more read­able and nuanced set of reflections.